Fists for the Fallen 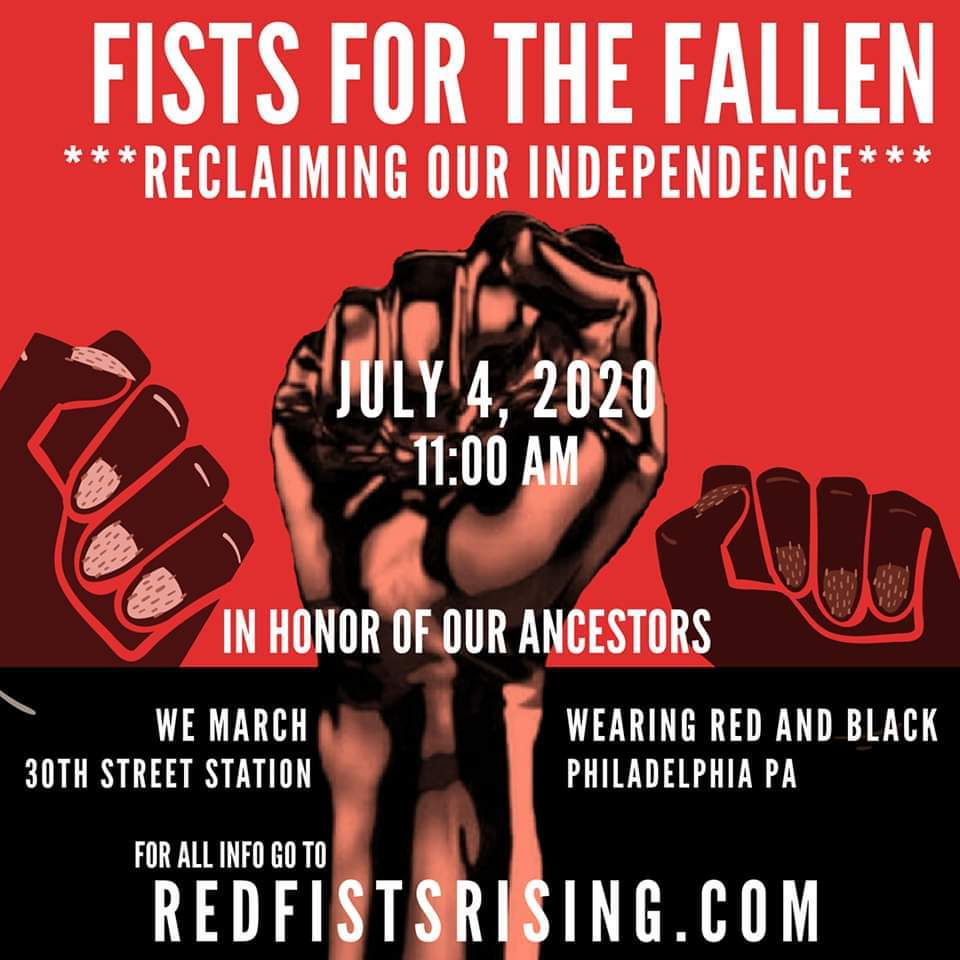 Fists For the Fallen Ceremonial March for our Ancestors

It is a ceremony. A ceremony for us all to do. It is an honor. It is in commemoration and love for everyone we have lost along the way. Every one of our ancestors that have died from the beginning of the MAAFA until this very day. For the innocent blood shed by our ancestors during the first kidnapping, the middle passage, the invasions of the Americas, the conquest and colonization of our lands in the Americas, Africa, and Asia, and racial oppression, atrocity, and brutality until this very day; represented by Trayvon Martin, John Crawford III, Michael Brown, LaQuan McDonald, Tamir Rice, Mya Hall, Freddie Gray, Salvado Ellswood, Alexia Christian, Sandra Bland, Assham Pharaohs Manley, Janet Wilson, Alton Sterling, Syville Smith, Philando Castile, Botham Jean, Pamela Turner, Ata’Tiana Jefferson, Breonna Taylor, George Floyd, Terron Boone, Robert Fuller, Rayshard Brooks…and so many more!

The ceremony will be held on July 4th, 2020, assembling at 11am at 30th street Station and JFK Blvd in Philadelphia, PA. All participants are being asked to wear all red, all black, or black and red. It is an absolute must that all participants have red fists. Your fists can be gloved, painted, or even holding a red sash/scarf. The core point is that we all have our right fist raised in red! This symbolizes the ocean of blood we have lost due to racial oppression under white world supremacy.

We are seeking at least 1000 or more courageous and faithful souls to participate in this sacred occasion. If you are unable to attend the ceremonial march in Philadelphia, others will organize similar marches in other cities on different dates, but under the same banner. But, we are asking that you, on this day at noon wherever you may be with your family, your friends, or alone raise your right fist covered in red high to the sky and think of all the family and ancestors that you and we together have lost from the moment this epoch of devastation; the MAAFA began until now!

We ask that you hold your fist high for nine (9) minutes if you can, to honor the spark of the 8m 43s that the criminal Derek Chauvin held his knee on Brother Floyd’s neck until he died!

Allow this moment to empower you with righteous indignation of the magnitude of the multitude that have bled their lifeforce that we may be here to survive and live today. This will begin the wave of justice due to our people.

We are headquartering in Philadelphia for the main flagship March, as this is the birthplace of the United States of America. We too will celebrate our Declaration of Freedom and Justice.