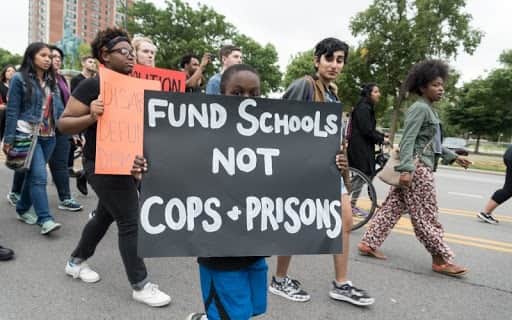 Since the uprisings began, the Philadelphia organizing community has made unequivocal demands for the City of Philadelphia to vote NO on a proposed increase to the police budget. In the last month, the city has responded to this public pressure and announced a reduction to the police budget by $33 million dollars. This supposed decrease in funding is simply a ploy by city officials to mislead the public. City Council has merely moved the budget for crossing guards to another department of city government. This type of subterfuge is unacceptable. We demand an immediate and authentic reduction in the police budget by 20%. We want public funds to enrich our communities, not the police. We demand the originally proposed $14 million police budget increase be augmented by $11 million and go to the Philadelphia School District budget for the removal of environmental hazards from schools, namely, asbestos and lead paint, which is estimated to cost $25 million per year.

We will gather for a rally at Germantown and High Streets on Saturday August 1, 2020 from 2:00pm to 3:30pm. Speakers will include members of impacted communities. Please wear a mask and bring water. We look forward to seeing you there!