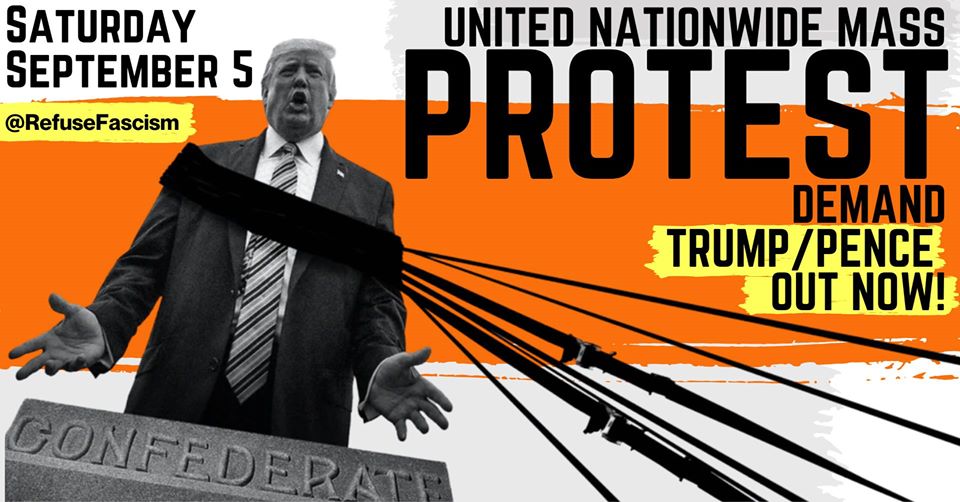 As Trump threatens the elections and sends fascist stormtroopers into cities:
Stay in the streets in August
Build for UNITED NATIONWIDE MASS PROTEST Saturday September 5
DEMAND TRUMP PENCE OUT NOW!

In Philly we will meet and rally at Independence Mall before marching through the city spreading this demand.

We are speeding toward an election that Trump is already contesting and now threatens to delay.

This election, if there is an election, will be a showdown over the form of rule in this country. Will the Trump/Pence regime hold on to power and be given a “mandate” to violently suppress dissent and criminalize protest? Will a regime that brands as their enemy all those who struggle for a better world – whether for Black lives or the environment or immigrants’ rights – be unleashed to exact revenge aimed at destroying our ability to stand up again?

This and worse is unfolding now, and it has a name: fascism.

Now is the time to marshal the people for a determined struggle by Labor Day to demand the Trump/Pence Regime get OUT NOW. All who have been demonized and criminalized by this regime and the millions who hate Trump and what he stands for must unite with an unwavering resolve to remove this regime from power at the soonest possible time.

A fierce battle for the future is underway.

The energy that millions of people, from many different nationalities, backgrounds, and political beliefs, brought to the streets across this country after the horrific murder of George Floyd, and the determination that thousands brought to the streets of Portland to stand strong against Trump’s stormtroopers, can and must become the force to remove this hateful regime from power.

For more than three years, people have relied on the normal channels to stop this regime, only to watch them turn into dead ends. But the months of Black Lives Matter protests show how dread can be transformed into a force for hope. Our power is sustained, mass, non-violent protest in the streets. Our strength is our diversity. Our demand is for justice. These are the ingredients that have driven out hated regimes and corrupt leaders around the world, from South Korea in 2017 to Armenia in 2018 to Puerto Rico in 2019.

Using voter suppression and gerrymandering, unfounded accusations of voter fraud (mainly by immigrants and Black people), attacks on mail-in ballots, and a plan to recruit ex-military and police as “poll watchers” to “challenge” voters they deem as suspicious, the Trump/Pence regime has shown its determination to maintain a stranglehold on power through legal and extra-legal means. Even talk of canceling or indefinitely “postponing” the elections is not outside the realm of possibility. Relying on the upcoming elections without a mass struggle now to demand the removal of the regime is a mistake with catastrophic consequences for people in this country and around the world.

We cannot wait for the Trump/Pence regime to further delegitimize and degrade the elections. Just as the German people could not have stopped their genocidal fascist program without driving out Hitler and the Nazi regime, we must act with all our resolve to drive this regime – a 21st century fascist regime led by a demented bully with his finger on the nuclear trigger – out of power. Allowing a regime like this to consolidate its rule in the most powerful country in the world is to foreclose on a future for humanity and the planet.

There is no painless resolution to this deepening crisis. In the words of the great abolitionist Frederick Douglass “If there is no struggle there is no progress. Those who profess to favor freedom and yet deprecate agitation are men who want crops without plowing up the ground; they want rain without thunder and lightning. They want the ocean without the awful roar of its many waters. …Power concedes nothing without a demand.”

To stop a vicious American fascism that threatens the very future of humanity, the necessary and unifying demand – for every struggle for justice to advance – is Trump Pence Out Now! The regime has already gone after the most vulnerable while continually expanding the groups of people in its crosshairs. Even if you survive that, what will you be forced to accept in the process? Who will you become as you accept the unacceptable?

We have everything to lose if we wait, but everything to gain if we act now to bring millions into the streets refusing to accept a fascist America.

There are two futures before us. Which one we get is up to us.

Labor Day weekend has always marked the end of summer. But with the COVID-19 pandemic – and this regime’s genocidal handling of it – we must mark the end of summer by making Labor Day weekend a turning point in the struggle to drive the Trump/Pence regime from power, building a movement with the necessary strength and resolve to stay in the streets day after day, night after night, not stopping until our demand Trump Pence Out Now is won.