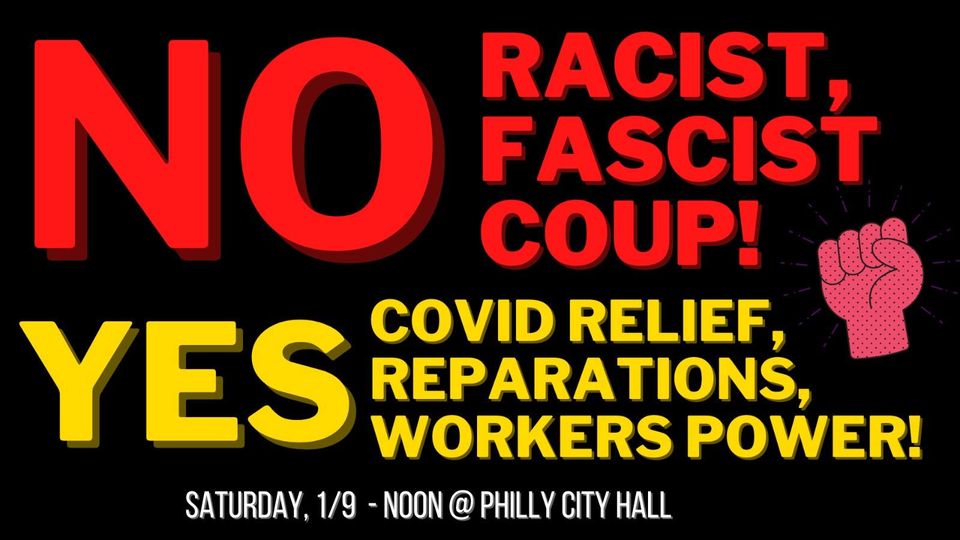 The coup attempt today and the mobilization of a fascist mob numbering in the tens of thousands must be viewed with the utmost seriousness. While it took the form of an assault on the capitol building, Congress, and the “institution of democracy” — halting for hours the Constitutionally-mandated approval of the presidential election — these white supremacist forces pose the greatest threat to the working class, especially the most oppressed. Their political aim is to crush with an iron fist every expression, even the most modest, of workers rights, social justice, and Black Lives Matter.

Capitalist politicians in both major parties are falling all over each other to disassociate themselves from the would-be coup makers, along with Trump, the instigator. But the failure of the state apparatus to prevent an outright invasion, however short-lived, of the citadel of political power, shows that they are unreliable and in no way up to the task of beating back a fascist threat.

We cannot depend on the state to prevent violent, KKK-like attacks on workers of color, who are and have always been the fascists’ primary targets. When have the Democrats and Republicans ever done so?

The fascist movement, for whom today’s mobilization marked a turning point in the worst way, demands a mass, independent response from the working class. It poses the question in the old union standard: “Which side are you on?”

The power of working people, in the streets and at the point of production, must be wielded to push back the fascist movement. We call on all of our side’s organizations, the unions, the youth, the Black Lives Matter movement, im/migrant, people with disabilities, LGBTQ2S+, women’s and gender-nonconforming people’s movements — and all working people, including unemployed, incarcerated, low wage, health care, transit, public sector, blue collar, gig, education and sex workers — to mobilize to crush the fascist forces.