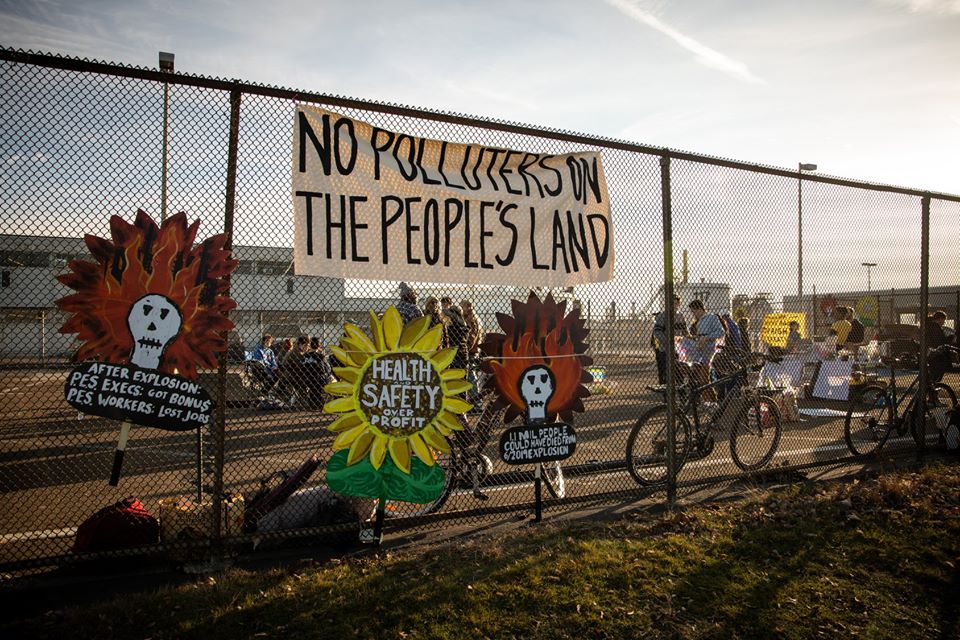 Philadelphians – led by Black residents in South Philadelphia – won a huge victory against racism this year when the PES Refinery was shut down. A year ago, the refinery exploded, putting us all at risk, especially Black communities living on the fenceline of the refinery.
We are reclaiming our #RightToBreathe – from shutting down the polluter in our backyard to defunding the police and demanding the city reinvest that money into our communities.

June 21st 2020 marks the one year anniversary of the PES refinery explosion in South Philly. After the owners neglected a needed maintenance project, a pipe as thin as half a credit card exploded, releasing 5,000 pounds of hydroflouric acid – an acid so intense it can burn through bones. The refinery’ s long-lasting presence over South and Southwest Philadelphia led to health issues in generations of Black residents, from higher rates of asthma and rare cancers.

We come together on this day to both grieve the destruction caused by 150 years of the largest oil refinery on the East coast, and demand the future of this land actively combats its racist past.
————–
The protest will begin at 11 AM outside the refinery site (2800 Passyunk).
Before the protest, we will meet at 10AM at the Fresh Grocer parking lot at 3021 Grays Ferry Avenue, for a car caravan through South Philly. If you need a ride to the refinery site you should meet us there. There will be shade & chairs for those who need to sit. Call/text 215-987-5972 for more info or to RSVP.
South Philly residents have higher rates of respiratory conditions that put them at higher risk of COVID-19 because of pollution and environmental racism. This will be a social distanced action; this is very important for supporting the well-being of each other. Please wear appropriate PPE (masks, etc) if you have it; there will be masks available for you at the site of the protest if you need!

The evening following the protest, Monday at 6:30 PM, there will be an online documentary screening about our campaign to close down the refinery for our #RightToBreathe. “On the Fenceline: A Fight for Clean Air” follows the activist organization Philly Thrive as they seek to keep the refinery closed for good.