Protest! NO To Trump’s Gestapo: Trump/Pence Out NOW! 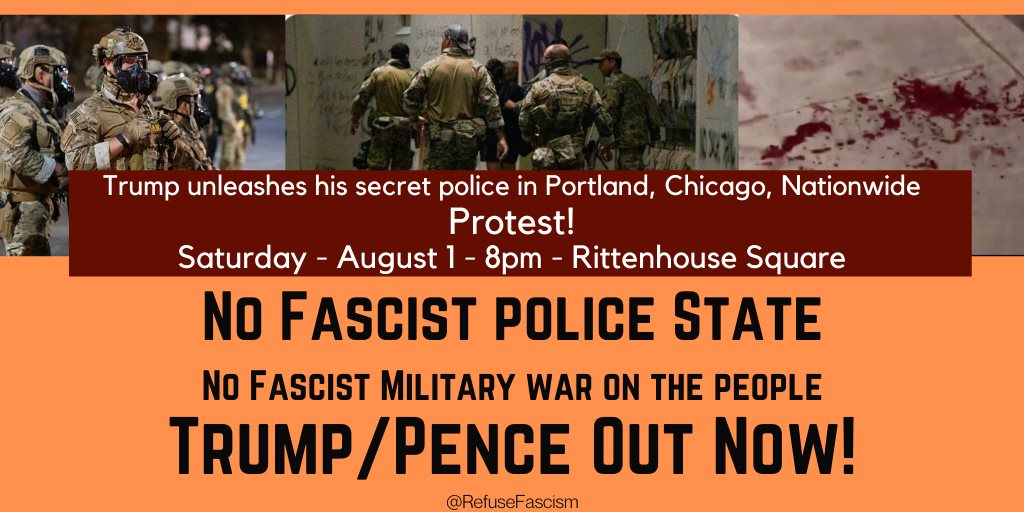 *note change to location and time*

Trump’s fascist military war on the people, starting in Portland and Chicago now, will only be ramped up if we don’t stop and drive them out – there is no back to “normal” & we cannot ignore or wait out fascism!

DM us to co-sponsor or otherwise get involved
Bring your congregation, your organization, your family – all who want an end to this regime are welcome to represent!

Stay in the streets, bring others with you – demand #TrumpPenceOutNow

This week, in an ominous escalation of fascism, the Trump/Pence regime sent federal troops from multiple agencies to storm the streets of Portland, Oregon and crush ongoing protests.

Dressed in camouflage with no identifying insignia, these agents rolled up in unmarked vans, arrested people without telling them where they were going or why they were being taken into custody, deployed tear gas, and shot one non-violent protester in the face.

Trump has not only threatened to “go and take over cities,” his regime is using Portland as a dress rehearsal for a militarized fascist police state.

This is not political theater. It is a dangerous advance from a regime that has declared their determination to crush the opposition and hammer in their rule by terror and brute force.

America is at a serious crossroads. A fierce struggle for the future is underway. Camouflaged soldiers that look virtually indistinguishable from right-wing militias, free to kidnap and detain anyone at their will, is a horror that must be stopped now.

Fascism has direction and momentum. Dissent is piece by piece criminalized. The truth is bludgeoned. Group after group is demonized and targeted along a trajectory that leads to real horrors. All of this has taken dramatic leaps under the Trump Regime. History has shown that fascism must be stopped before it becomes too late. If we lose the right to protest – by legal or extralegal means – all bets are off.

Trump is not “losing an election.” He is setting the stage to declare any outcome other than his victory illegitimate, backed up by a GOP willing to rig elections and the violence of the “police, military, and bikers for Trump” to attack and suppress any opposition to their program. Waiting for November to remove Trump is like waiting for rain when a house is on fire.

As Trump unleashes his secret police, what will you do? Will you accept a fascist America? Will you stand aside hoping that politics as usual will remove a regime that is subverting elections and using the military to crush dissent? Or will you join us in the streets and stay in the streets to demand Trump Pence Out Now!

Dangerous regimes all over the world have been driven out by the people in sustained, non-violent protest demanding the removal of the regime and refusing to go home until their demand is met. To stop an American fascism that threatens the very future of humanity and the planet, the necessary demand is Trump Pence Out Now! We must not stop until our demand is won.

This nightmare must end.
The Trump/Pence regime must go.
In the name of humanity, we refuse to accept a fascist America.