Protest Pence at the Fraternal Order of Police – Trump/Pence Out Now! 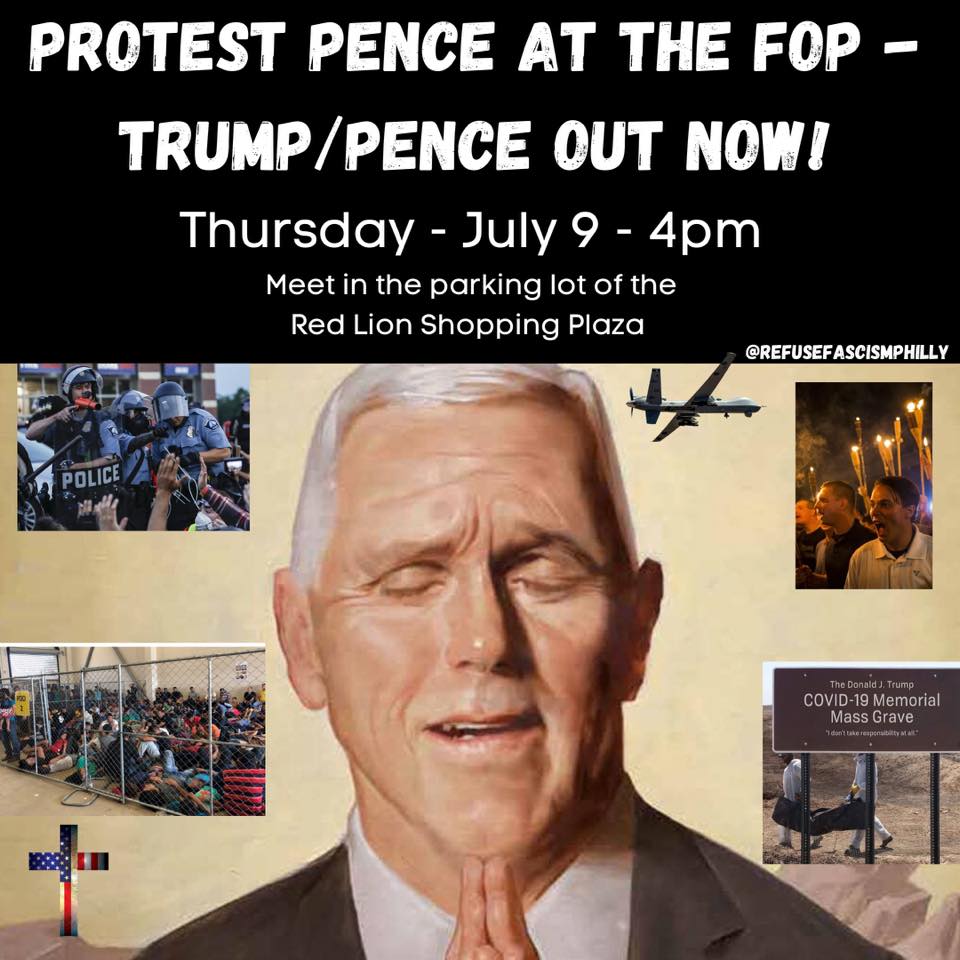 VP Mike Pence is coming to Philadelphia on Thursday to speak at the HQ of the most virulent white supremacist organization in the city – the Fraternal Order of Police. As his boss says, “Trump loves cops and cops love Trump.” The “Blue Lives Matter” crowd is a key element of the fascist united front that this regime is bringing together, not just for victory in November, but to consolidate American Fascism. This cannot go unopposed.

America is at a serious crossroads. A fierce struggle for the future is underway.

Trump is campaigning on openly celebrating and defending the Confederacy, with a clear message that he will unleash the violence of the police and military and his heavily armed MAGA shock troops against the movement for Black Lives.

He threatens to toss aside the 1st Amendment to jail those who burn the flag, a constitutionally protected act of free speech.

He has demeaned mayors of Chicago and Seattle while threatening to send in federal forces “to clean up” their cities; He has doubled down on his anti-immigrant rants and program.

In the midst of skyrocketing deaths from COVID-19, the Trump/Pence regime petitioned the Supreme Court to strike down Obamacare. In his press briefing, Pence urged Americans to pray but did not once urge them to wear masks. The regime has the blood of tens of thousands on its hands who have perished due to the regime’s science-hating, genocidal dismissal of a global pandemic.

Genocide, slavery, the Confederacy, Jim Crow … virulent white supremacy, misogyny, and xenophobia … an American empire that has invaded, subjugated, bombed and occupied countries around the world.

This is the history and these are the values of Make America Great Again, hell-bent on exacting revenge against the liberation movements of the 1960s and the hard-won social progress of the last 50 years – social progress that was only made possible by people courageously taking to the streets and refusing to back down.

The upsurge of struggle for Black Lives matters a great deal. It must continue to broaden and deepen its determination to win, which includes acting on the recognition that an avowed white supremacist regime poses a mortal threat to Black people and must be driven from power. Refuse Fascism, since its founding has recognized and struggled for the understanding that at the core of the fascist regime is white supremacy. Along with hatred of immigrants and women and differently gendered people, these form a triad of the fascist program that must be opposed.

This nightmare must end.
The Trump/Pence regime must go.

NO MORE POLICE MURDER OF BLACK PEOPLE
NO FASCIST POLICE STATE
NO FASCIST MILITARY WAR ON THE PEOPLE
TRUMP/PENCE OUT NOW!