Rally for Political Prisoners • What’s the Call? Free Them All! 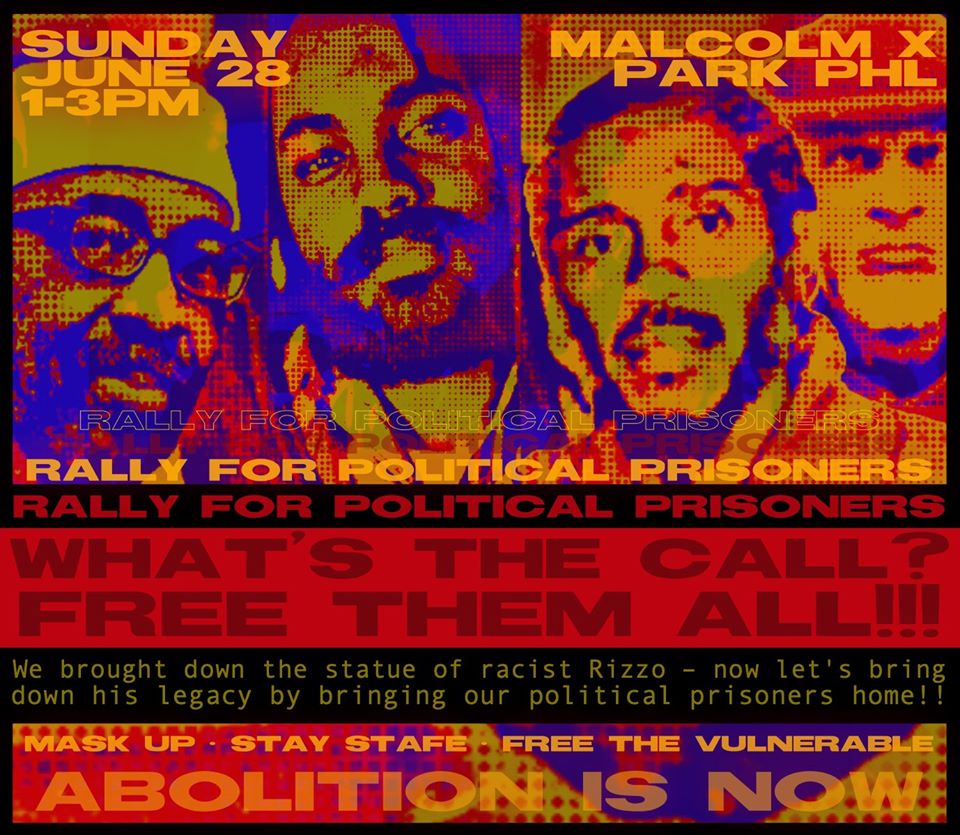 We brought down the racist statue of Rizzo, now let’s bring down his legacy by bringing our political prisoners home!

Join Us on Sunday June 28th at Malcolm X Park from 1 pm to 3 pm as we center the lives and stories of our Political Prisoners in Pennsylvania and incarcerated people as we struggle to defund the police, dismantle the Fraternal Order Police and Abolish Policing. Philadelphians celebrated when the statue honoring the late racist Frank Rizzo was finally brought down in response to the demands of thousands of protesters that took to the streets against police terror. Now that the statue has been brought down, let’s bring home his victims. They had the courage to fight Rizzo when he was alive, let’s have the courage to fight for them as we fight to defund the police and work toward a future without police.

The Philadelphia “justice system” that arrested and tried Mumia is the same racist and immoral system that dropped a bomb on 11 civilians including 5 children of the MOVE family 35 years ago. It is the same racist and unjust system that holds our Black Political Prisoners who are Black Philadelphians imprisoned for political offenses stemming from the racist policing of the late Frank Rizzo. Mumia Abu-Jamal, Russell Maroon Shoatz, Joseph Bowen and Fred Muhammad Burton. They have been in prison for over 40 years. They have served enough time. It is time to bring them home. They are all seniors, members of a vulnerable population whose incarceration by any measure does not serve our communities or justice. We brought down the racist statue of Rizzo, now let’s bring down his legacy by bringing our political prisoners home!

The same immoral system that is holding our political prisoners is also holding thousands of seniors and medically vulnerable people during the COVID-19 pandemic and refusing to release them. The Governor, Legislature and Mayor have failed to release them. Join us as we remind the people in power that we are not going to rest until our loved ones are free.

The system of mass incarceration and retribution has failed our communities miserably and we need to move to a new model of restorative and transformative justice.

Speakers will be announced.
Lit tables will be available.