Rally: Justice for Jacob Blake and All Victims of Police Terror 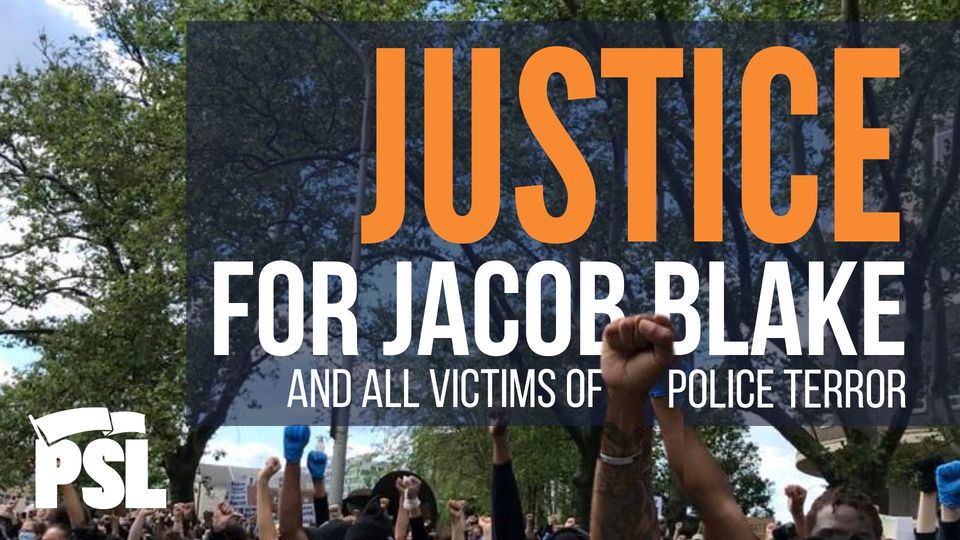 Join us as we demand justice for Jacob Blake and declare our solidarity with the rebellion against racist police violence across the country! We will meet at 5 p.m. at City Hall on Friday, August 28th. This rally will observe physical distancing guidelines. We ask that all attendees wear a mask and remain at least 6 feet from anyone they do not live with who is in attendance.

Please reach out to endorse or build with us!

The Party for Socialism and Liberation condemns the heinous shooting of Jacob Blake by the Kenosha Police Department. Our sympathy goes out to his family and his community. It is not enough to merely fire the officers involved. Jacob Blake, who was breaking up a fight when police began to intervene, committed no crime. And yet, two officers fired multiple shots into Jacob Blake’s back as he walked back to his car where his three sons were sitting. We are calling for those officers to be immediately arrested and charged. Justice can only begin with a conviction and sentencing of all involved, followed by the disarming and defunding of the police!

We stand in solidarity with the righteous anger of the Kenosha community, protestors across Wisconsin, and protestors across the country. The people once again must come out to fight in justified indignation to demand justice for Jacob Blake. Already, the Wisconsin National Guard has been deployed to repress the movement against racist oppression in this country and it is through people power that we can fight back.

This latest incident of state-sanctioned racist terror comes following a summer of uprisings as a result of the killing of George Floyd. While our government has avoided even passing mild reforms, preferring instead to engage only in symbolic appeasement, violence in our communities continues as a direct result of police and vigilante violence and murder.

Join us as we demand justice for Jacob Blake, standing in solidarity with the continuing rebellion against racist police violence! Through our collective strength, organization, and righteous anger, we will force change!