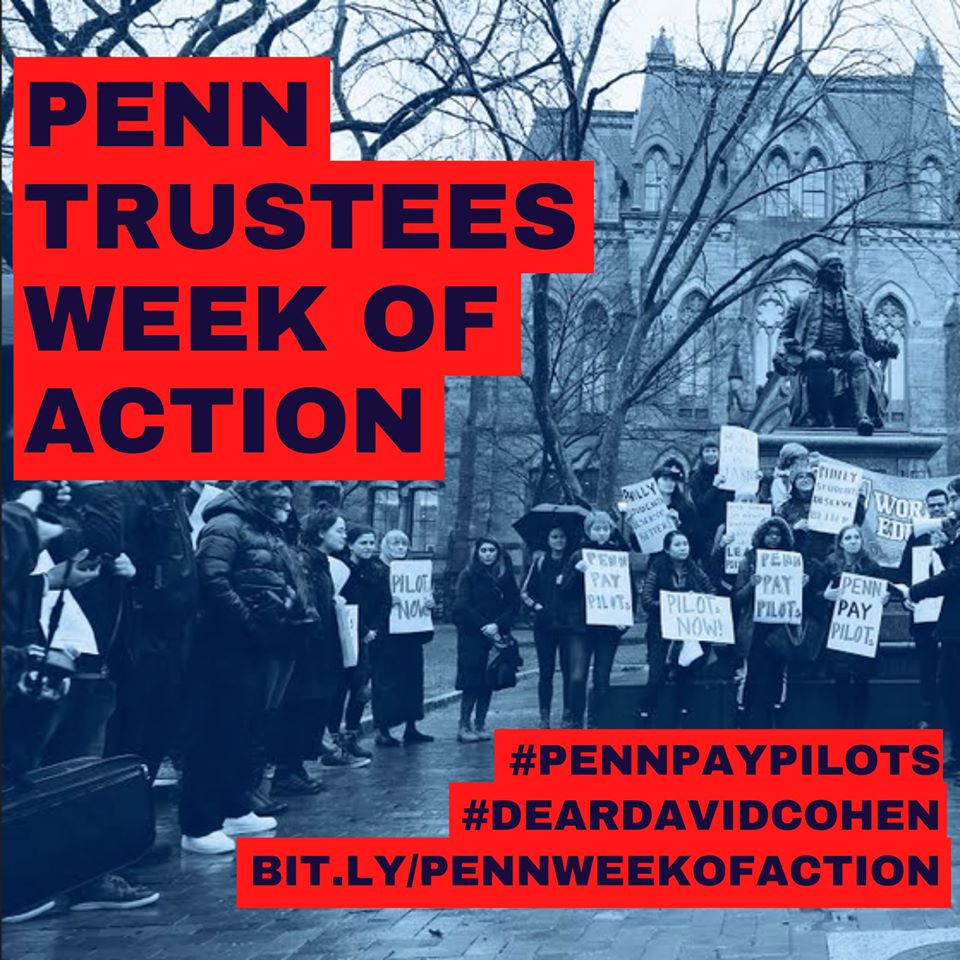 SIGN UP FOR A SOCIALLY-DISTANCED CAR OPTION HERE: https://docs.google.com/forms/d/e/1FAIpQLSeUT33TTqa7fOd0w9F-m-KZ9LRmLqw7tt1lgUopEL18e0HUFQ/viewform?usp=sf_link

Join us for a rally to demand PILOTs from David Cohen, the Chair of Penn’s Board of Trustees! If you’ve been impacted by the public school funding crisis, if you’re a member of the Penn community, or if you’re a concerned Philadelphian, we need your voice to win this urgently-needed source of revenue for our schools.

We will be gathering in front of the Walnut Street entrance to the Inn at Penn, where the Board of Trustees holds their meetings. Penn Board Chair David Cohen is out of excuses–we need PILOTs now!

Philly’s public schools are in crisis, and Penn’s Board of Trustees have the power to change that. The Philadelphia Inquirer has made us all aware of the deadly consequences of asbestos in the schools, and students, teachers, and staff are risking their lives every time they step into a school building.

At the same time, Penn is a multi-billion dollar institution and the largest private landowner in the entire city, but pays no property taxes. In a city where most of the local funding for our school district comes from property taxes, mega-nonprofits like Penn are directly contributing to our public school funding crisis. Our public schools serve mostly low-income Black children, and Penn’s refusal to pay their fair share is part of the long legacy of racist disinvestment in Philadelphia’s Black community.

Penn’s Trustees are some of the wealthiest and most powerful people in the country. The President of the Board of Trustees, David Cohen, is especially powerful here in Philadelphia. In 2017, the Philadelphia Chamber of Commerce, led by Cohen, sued the city over a law that aims to close the gender pay gap. He was also one of the highest-paid executives at Comcast, with a total compensation package of $19.1 million in 2018.

We’re calling on Penn to contribute just a fraction of the yearly value of their property taxes. We need schools with teachers, librarians, nurses, and safe buildings. David Cohen and the rest of the Trustees have evaded paying PILOTs for decades, and we’ve had enough.

We will have masks and hand sanitizer. If you would like to participate but aren’t able to join the crowd, please reach out to aiden@phillyjwj.org for a more socially-distanced option.