Speak out! No Fascist USA – Trump/Pence Out Now! 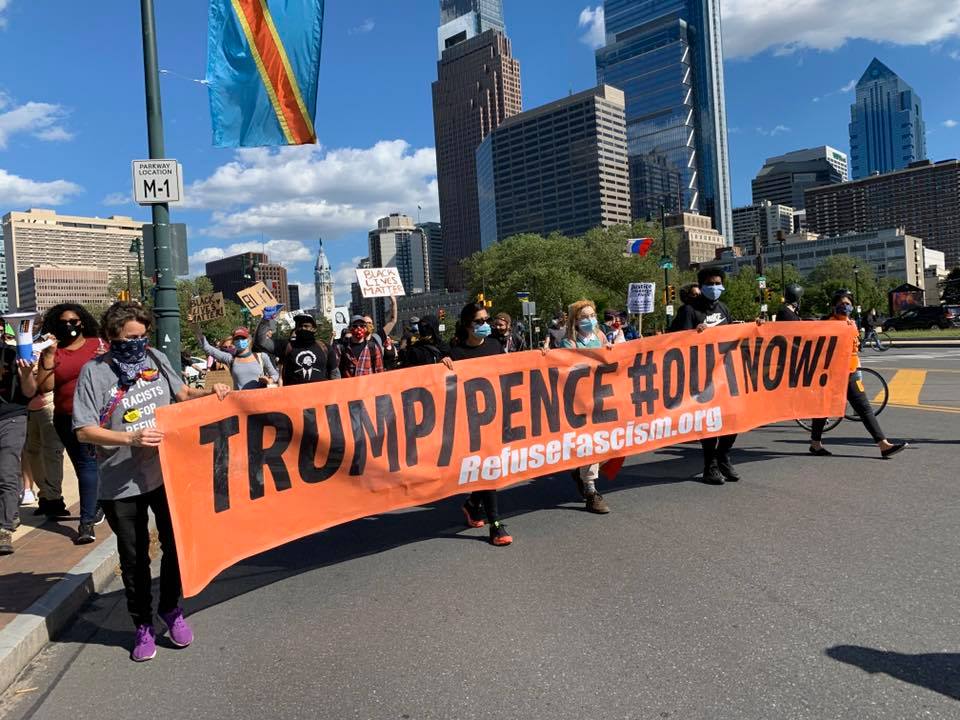 *Bring your friends, your mask, and your voice!*

Take to the streets July 4th!

This nightmare must end!
TRUMP/PENCE OUT NOW!
In the name of humanity, we refuse to accept a fascist America!
America is at a serious crossroads. A fierce struggle for the future is underway.

Trump is campaigning on openly celebrating and defending the Confederacy, with a clear message that he will unleash the violence of the police and military and his heavily armed MAGA shock troops against the movement for Black Lives.

He threatens to toss aside the 1st Amendment to jail those who burn the flag, a constitutionally protected act of free speech.

He has demeaned Mayors of Chicago and Seattle while threatening to send in federal forces “to clean up” their cities; He has doubled down on his anti-immigrant rants and program.

In the midst of skyrocketing deaths from COVID-19, the Trump/Pence regime petitioned the Supreme Court to strike down Obamacare. In his press briefing, Pence urged Americans to pray but did not once urge them to wear masks. The regime has the blood of tens of thousands on its hands who have perished due to the regime’s science-hating, genocidal dismissal of a global pandemic.

This is just in the past week. Stop and think if you can live with all this. The lives of countless more here and around the world are under threat.

Trump is not losing an election. He is setting the stage to declare any outcome other than his victory illegitimate, backed up by a GOP willing to rig elections and the violence of the “police, military, and bikers for Trump.” He is declaring his determination to prevail.

The people on the side of humanity must be equally determined to prevail. On July 4th and in the coming weeks, we must take to the streets in growing numbers to demand: The Trump/Pence Regime Must GO!

Should we fail to take to the streets and stay to win, do not for a second think that the fascist agenda of the Trump/Pence regime could not become the law of the land. But the last four weeks of sustained protest has also shown us that another future is possible – if the demand that Trump and Pence must go now becomes a part of the great rising in the streets against police murder of Black people. Without going all the way to driving out the Trump/Pence regime, the movement for Black lives and every struggle for justice will be crushed.

On this July 4, take to heart the words of the escaped slave and abolitionist Frederick Douglass: If there is no struggle there is no progress. Those who profess to favor freedom and yet deprecate agitation are men who want crops without plowing up the ground; they want rain without thunder and lightning. They want the ocean without the awful roar of its many waters. …Power concedes nothing without a demand.

Genocide, slavery, the confederacy, Jim Crow … virulent white supremacy, misogyny, and xenophobia … an American empire that has invaded, subjugated, bombed and occupied countries around the world.

This is the history and these are the values of Make America Great Again, hell-bent on exacting revenge against the liberation movements of the 1960s and the hard-won social progress of the last 50 years – social progress that was only made possible by people courageously taking to the streets and refusing to back down.

This nightmare must end.
The Trump/Pence regime must go.
TRUMP/PENCE OUT NOW!