Towards Day-After-Day Protests in October: Trump/Pence Out Now! 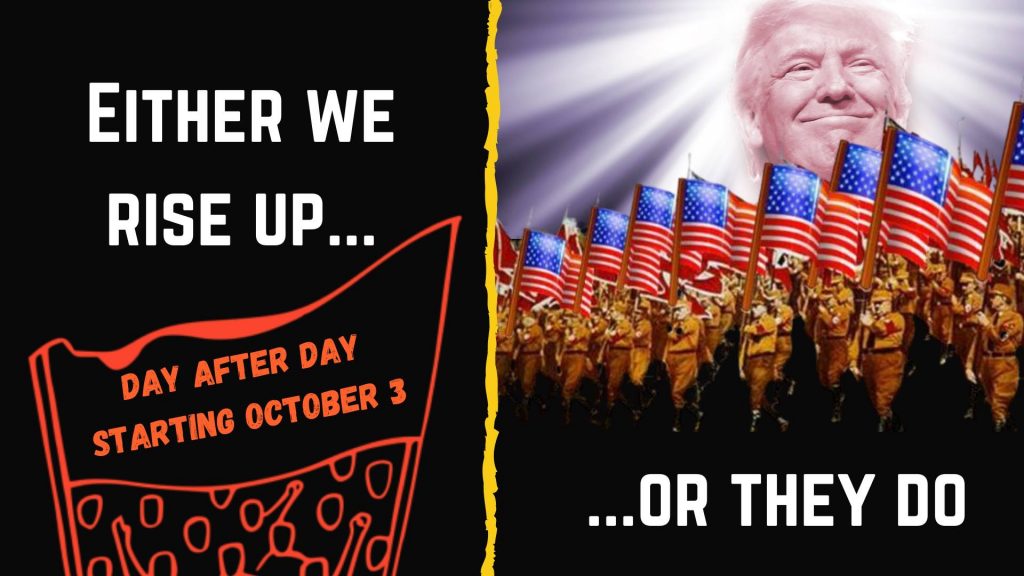 *Come together to learn more about and organize for plans to take to the streets throughout October nationwide, including here in Philly to stop a regime that threatens humanity before its too late.*

We face a rolling coup barreling to a showdown on November 3. The Trump/Pence regime have said and shown that they will not abide by an election they lose.

It is the regime—Trump, Pence, Barr—who have raised the specter of insurrection and sedition. It is the regime that is tearing up the rule of law. It is the regime that demonizes and brutalizes immigrants, Black people, Latinos, Native Americans, women, LGBTQ people, the media and peaceful protesters. It is the regime that opposes science, leading to a country and a planet burning and drowning, and to unconscionable unnecessary death and illness from Covid.We face a critical crossroads. The hour is late, but not too late. Relying only on our voting will lead to disaster. The Trump/Pence regime is subverting the election now and preparing to nullify it. Waiting to act till they do so will be too late.

Trump’s MAGA mobs maraud around the country in water and land caravans; they murder protesters and innocent people by guns and by their cars. They spread Covid. They are inflamed with passionate reactionary intensity. All for the purpose of rousing their followers and intimidating and demoralizing all who should be standing up for justice.

Now we must act. Beginning Saturday, October 3, gather and bring your family, friends, and community into the public squares of cities and towns across the country in non-violent protest unified by the demand: Trump/Pence OUTNOW! And, come back in waves, day after day. This is possible. We saw this in June and early July where people came out every day for justice for Black Lives. Now, that struggle, and every struggle, and the lives of millions of people hang in the balance. In our diversity, with our multiplicity of causes and demands we must come together and reach out to others to join us, recognizing that should the Trump/Pence regime remain in power it will be a disaster for every just cause, and most of all, for the lives of people here and around the world.

We will act on our principles, modeling the world we aspire to in contrast to the bigotry and hatred of this fascist regime. We will act together with creative joy and with the conviction and courage of standing together not only for ourselves but for all humanity.