Trump Is Still Trying to Steal the Election! 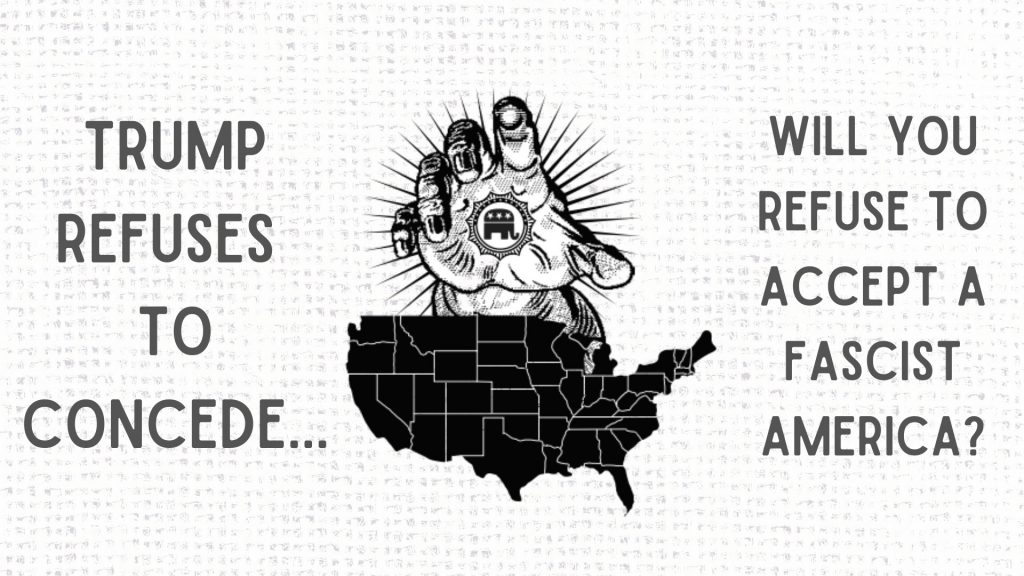 Saturday, November 14
Trump Is Still Trying to Steal the Election!
NO!
Trump/Pence OUT NOW!
In the Name of Humanity,
We REFUSE to Accept a Fascist America!
The media has declared Biden is the clear winner of the electoral college and popular vote.
This is a very good thing, but the struggle is far from over.

The Trump/Pence campaign is filing multiple suits in courts that they have packed with reactionary judges up to the Supreme Court. Trump’s MAGA mobs are mobilized. Tens of millions voted for his fascist program that has tortured immigrants, unleashed white supremacist terror, exacerbated the climate crisis, spread lies and COVID, and stacked the courts with theocratic Christian fascists. The Republi-fascist Party is standing by Trump and is in control of the majority of state governments, as well as many of the courts—including the Supreme Court, which Trump has openly called on to support his claim of victory.

As long as Trump and his regime are still in power, as long as their followers are filled with passionate vengeance, they can still prevail through legal and extra-legal means.

We cannot let them dominate the public space and public discourse. Now, our struggle enters a new phase… as the fascist regime and its supporters try to usurp the rule of law.

The people must seize this moment and go all the way to driving this regime out and driving this fascist movement back and its hateful vicious program from every part of society. Our side must unite, organize, and be in the streets. Fascism is NEVER legitimate.

We must organize and mobilize on a whole other level. Sign up at refusefascism.org and get connected. Find where and when Refuse Fascism gathers in the public square in your town – come and join us and bring your crew.

Stay in the streets and demand Trump/Pence Out Now! We must not stop until they’re gone.